My enthusiasm for Refereeing has never been red hot.

However in recent weeks I've been picking up the whistle a little more frequently. It's still not a job I particularly relish but I do feel the standards I am disposed to apply can improve the game a little from the point of view of a slow, and non-contact standpoint which all of us within our group should aspire to play.

I consider my ability is adequate,  and I don't pretend to be much good.  For me 'adequate' is all anyone has a right to expect, including myself.

Furthermore popularity on the pitch does not feature high on my agenda either and if some of my decisions meet with disapproval from some, they may well meet with approval from others.I can spot people who are not walking, or at least not 'trying' to walk and that's probably my best quality as a Ref.

Contact is a little harder for me to get to grips with and split second analysis can be tricky.  Who is backing in?  who is pushing forward ?  The challenge from the back is much easier to spot than the illegal dispossession from the side, irrespective of whether there is contact , or not. A truly good Referee will never please everyone.

Any rewards are small and come mostly in the satisfaction of a job well done.  If evidence is available in the form of match film (it often is)  so much the better,  recent examples of my own 'Reffing' I've found to be fairly rewarding in the way the games have panned out. They are also useful in spotting mistakes, which of course I am guilty of sometimes. As the prime instigator of filming I can be hoist by my own petard - so be it.

When games are more 'significant' like the recent Extra-time 'Amity' Friendly then the more exacting the job can become, however I feel I have acquitted myself fairly well, and once again the evidence is there on youtube for all to see,  including myself of course.

Standard Club Refereeing on recreational days is less demanding but the need for 100% focus is still there.  This is difficult when other sessions matters might enter my head.

However,  I don't think any Referee can focus 100% of the time on any given game. 99% should be...I return to that word 'adequate'. I have asked to be included the next time a 'tournament' Referee course is arranged in the area.

Not because I harbour ambition to enter the 'tournament' circuit and take on paying jobs at the moment  but because such  a qualification might mean I can do that at some point should I wish to. I am learning all the time.  Learning to manage my own temperament too,  in the right way for such  a role.

Recent committee decisions at Denton mean that from September Referee's will be encouraged to take a small 'expenses' fee instead of donating it back into the group funds.  This has gone on for a long time and the cash has been used for a variety of causes. It stands now at  a substantial three figure level. 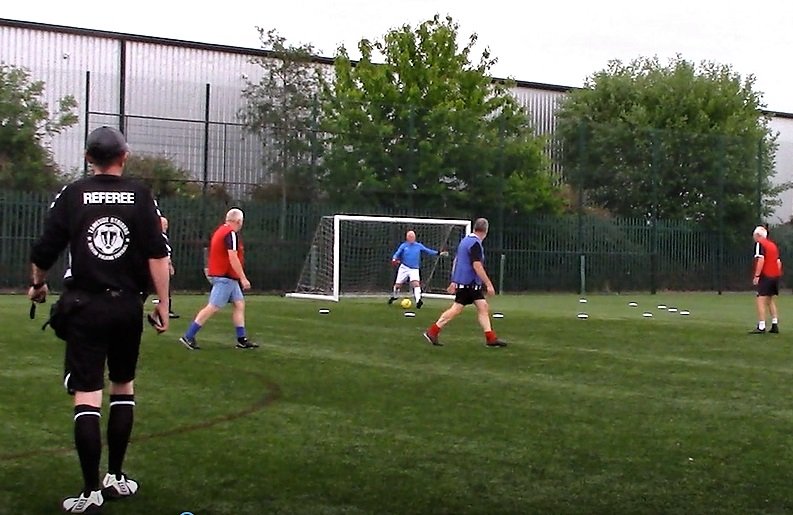 As the  Groups prime Treasurer, I explained the reasons for this. If weekly 'subs' are to increase we do not need exponential growth in cash reserves to keep the group sustainable.  If Referee's at our sessions are willing to give their time, often at the expense of playing a game themselves then they deserve to be modestly rewarded in the form of expenses.    If a Referee has played or goes on to play on the same day then his 'subs' are required, just like anybody else.

Not everyone agreed with my reasoning here, but a majority did. It's also felt that some of our qualified club Referee's might seen an incentive in doing the job for us,  even on an infrequent basis.

So, I hope to continue Refereeing and maintaining what I consider to be the right level of compliance on the pitch for a slow, non-contact game under the generic of 'walking football'  A game which has laboured under that atypical nomenclature for too long but seems set to go on.

Running, or 'not walking' is a blight and gives some people unfair advantage over others. I am casting stones here but of course  I am not without sin myself as a player, and on  a handful of occasions I have been penalised for running over the last few years.  Almost everyone does it. But those who never or seldom do are a shining example to us all.  Undoubtedly, in my case  I  definitely  should have been 'nicked'  more often. I could never penalise every instance of 'not walking'  on or off the ball as the game would not finish,  but Running , and moving at speed looks so incongruous it invites a blow. I'm happy to say that the games I have recently Refereed have seen more people at least trying to walk ,  thereby keeping  in compliance with the rules which is ultimately what any Referee would request.