For several weeks now the people charged with moving our group forward have been considering demographics and the way we are made up of long standing players all of whom are ageing.  We have been in existence as an independent group for some time now and the average age of our players is now sixty eight years.

The Overs hour has been aimed at 67 + players for two years now and from December 1st. this will change to 68 years.

The few people  over that age who prefer to play from 11-15am. can continue if they wish.

Beneath the age of 68 there is now a large void to the customary fifty plus marker which applies to most walking football. We only have three players in their fifties the vast majority  of the rest BELOW the average  are in fact in their mid sixties and  if it weren't for the three younger players our median age would be around the seventy mark !

As a consequence of this we  have decided that D.W.F.G. Tameside Striders will limit male membership  to those over the age of sixty years in future.

Within two years from now the  'Overs' hour on Tuesday's  will probably cater for those aged over seventy, leaving a further hour for those in their sixties and those  in their fifties who are unaffected by this change and are of course welcome to continue attendance.

Their continued  membership is assured.  Efforts have already been made to contact them and to stress this point.  Our trio of 'fifty somethings' are integral to our group and highly valued.

In the wider walking football world  the Over fifties game  is developing apace.  For  those between 50 and 60 it  tends to be much more competitive in nature and can little resemble the kind of game we want to  see played at Denton. Those of that age who approach us for membership -  and there have been none for twelve months or more - will be directed to other venues.

We hope our players will see the sense in this move but members of the committee are available  should you wish to talk it through.  We repeat that current players are not affected by this change.

Thursday sessions will still be aimed at those of our players over 65 and in the short term will carry on in its present format.  We may introduce age segregation at some point, and in fact we were on the edge of doing so just before the first lockdown came into force last March.

When we return players will need to attend on their regular day unless local conditions mean some of our regular players are still excluded from travelling.  We will keep you updated.

Female recruitment remains limited to  aged thirty five plus but currently there is very little scope to increase our membership. 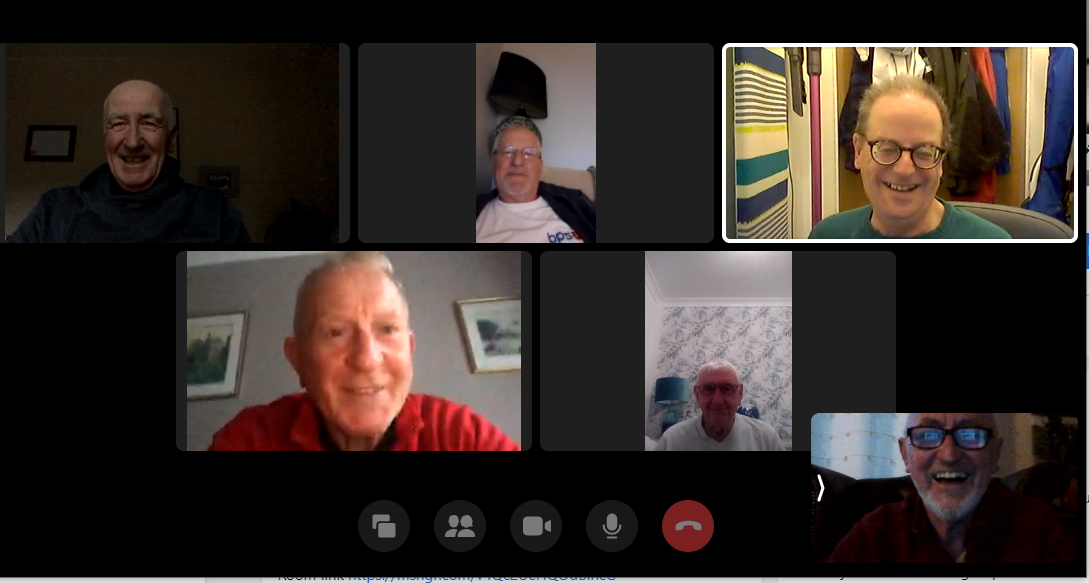 We all expressed regret at the short term exclusion of Glossop area based players which of course includes our Chairman Mr.Nixon.

They will all  be missed.  If they should decide to arrange their own small sided games or kickabouts in the meantime,  we are willing  to help in any way we can (equipment wise) and  stand ready  to assist if required.

Several Thursday players have asked to make up numbers on Tuesday and this has been given the green light for now but only on  a SHORT term basis until something like normality returns.

The 'Fifty Quid' Quizzes on 'Whats App' on  the first Wednesday in November and December are set to go ahead with first Colin Fielding then Gordon Nixon posing the questions. There will be a musical theme from Colin and Gordon will focus on Sport but there may well be a smattering of General Knowledge from both of these quizmasters.  Join in for fun but you will also have a chance of winning fifty pounds and the odds of winning should be quite  favourable.

The situation at King Street over the last two Tuesdays since Lee departed the office has been poor.  With no drink facility available and the premises more or less vacated whilst we played. We have made our feelings clear on this and it's hoped there will be a major improvement from this coming week.

Finances are encouragingly good. Recent purchases ( masks )  have made a small dent in our resources but they remain buoyant. This week we again handed a large cheque over to D.Y.F.C. for the pitch which current numbers more than cater for. A similar sum was paid into our bank last  Monday.  Each week we have a small surplus from both sessions.  Bank statements are regularly posted to the committee. If the numbers  attending do drop it will be a few months before we need to worry about it.

Mike Armitage has been in touch.  Unfortunately his Wife is not at all well, and it's unlikely we will see him again at Walking Football  as he will be protective of her in the Covid climate. They are thinking of moving away to  a different kind of environment, possibly more rural. The committee wish Mike good luck in any such move and hoped his good lady returns to good health soon.

We have four D.W.F.G.  jackets on  order.  Our current style has been discontinued. It will be interesting to see the new replacements on V O'B  ,  CW ,  SB  and DM  (can you figure out those initials?)

Mask sales went quite well last week. A handful of them will be retained for players who said they wanted one when the idea was first floated but who haven't yet collected. D.Cooper, Tracey Vulcan , Steve Stafford and Ivan Taylor. The rest will be sold first come first served for £2 each but there will be a maximum ten available on each of the session days this week. We can always order more but these will cost more if we do that.  We will have subsidised these masks to the tune of about eighty pounds.

'FRIDAY NIGHT LIGHTS"' planning is weLl underway.  The teams will be drawn next week via  another 'ZOOM' meeting.

The five teams have been named as follows.  Anyone would think these games were to be played at night.  It's hoped this fun evening can go ahead as all need a little LIGHT relief at the moment. Boom boom !

Places for 'reserves' are open and someone is sure to drop out. 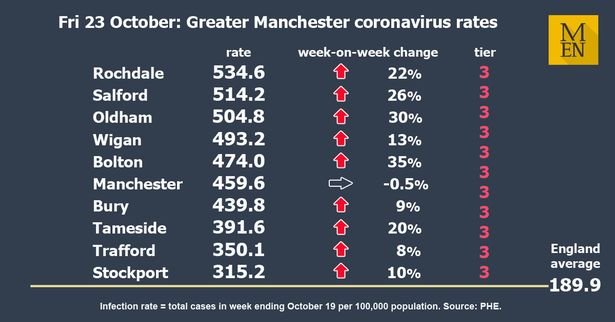 Finally the situation regarding some players taking part in a friendly game in Salford on 25th. October for the Curzon Ashton Over 50's.  Concern was expressed at the very high infection rate in Salford at the moment (Second only to Rochdale in Greater Manchester).

It soon  became the unanimous view of the committee that anyone taking part as a squad member should be asked to stay away from Denton sessions this coming week.  It should only affect  a small number but we hope they understand our reasons for this is consistent with our cautious approach. We wish the players concerned  well in that game and we hope to see you the following week November 3rd.

We had a 'zoom' type committee meeting today all members were present save for Graham Brown the Co-treasurer.

Group finances are growing steadily again and are healthy,  but we are in  arrears for our pitch (as arranged with D.Y.F.C. ) Currently the bill stands at £310 for three weeks use. 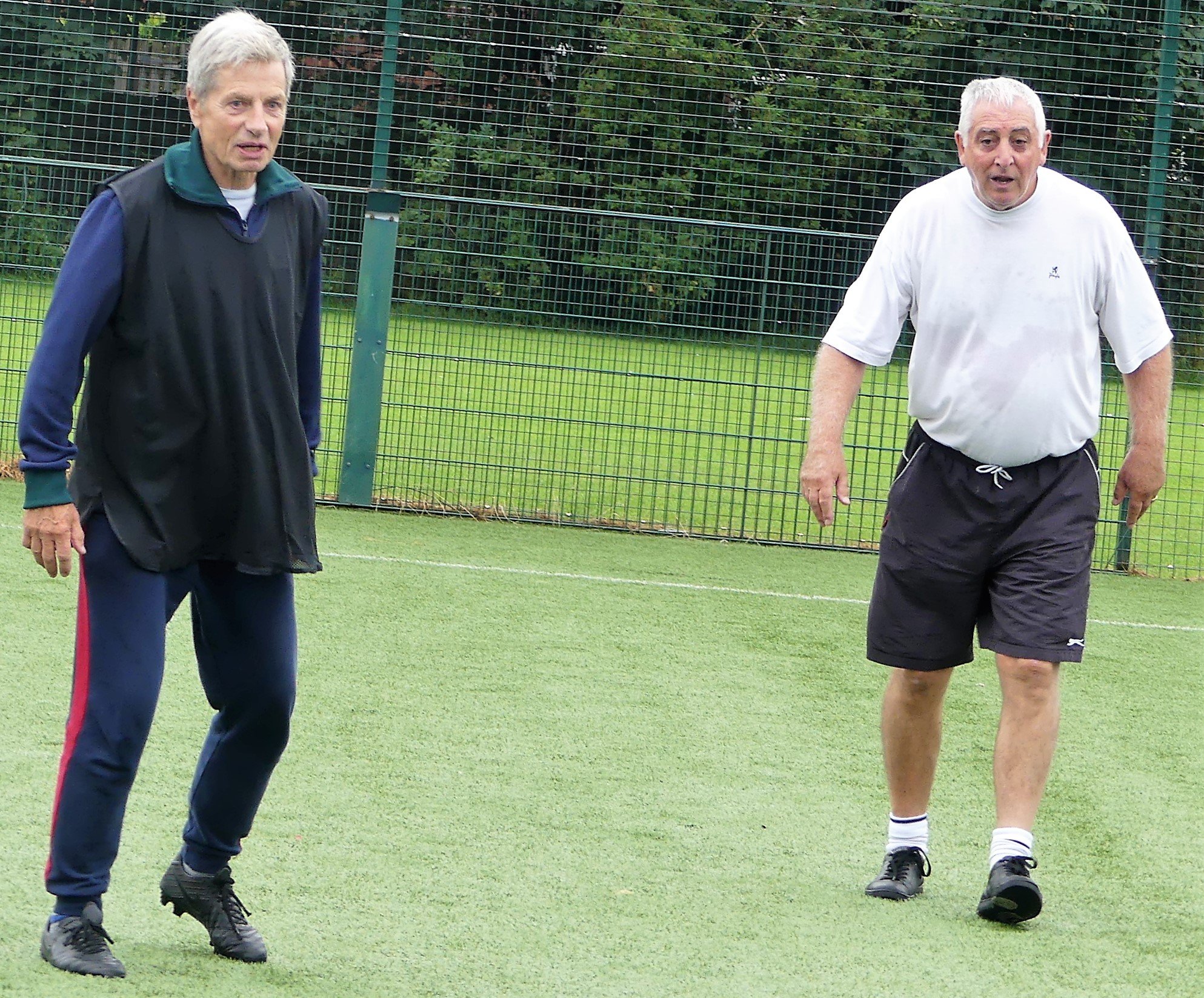 We wished to express our thanks to David Gibbons for facilitating Willie Donachie's visit last week.  The Secretary asked if anyone was in contact with an ex-player or current at Manchester United who may be interested in coming to King Street.  In the interests of balance.

The committee has decided to persevere with sweeper/keeper games into September, but this will be kept under review every two weeks.  It's hoped our goalkeepers will take part.

It's thought in this format results matter a little less and this is reflected in the attitude of players in terms of competitiveness.

As Darren Sullivan is not attending Denton for a few weeks an invitation has been extended to Andy Truett who has expressed interest.  There will come a time when Darren returns of course and his squad number will be held for him.

Where players look unlikely to return after lockdown their bibs will be passed on to new players.  We have several who expressed interest before lockdown and they look like becoming regulars now.  A phone call, text or email saying that you will return eventually is all that's needed to retain your numbers.  Les Gillan, Ken Dean are just two we know about already. David Wilson has contacted Eric Thomas and he is set to return next week.  Mike Armitage, Julie Walker and Terry Clarke are three who may need to be issued with a new number when they eventually  return.  Geoffrey Griffiths will be contacted this week. 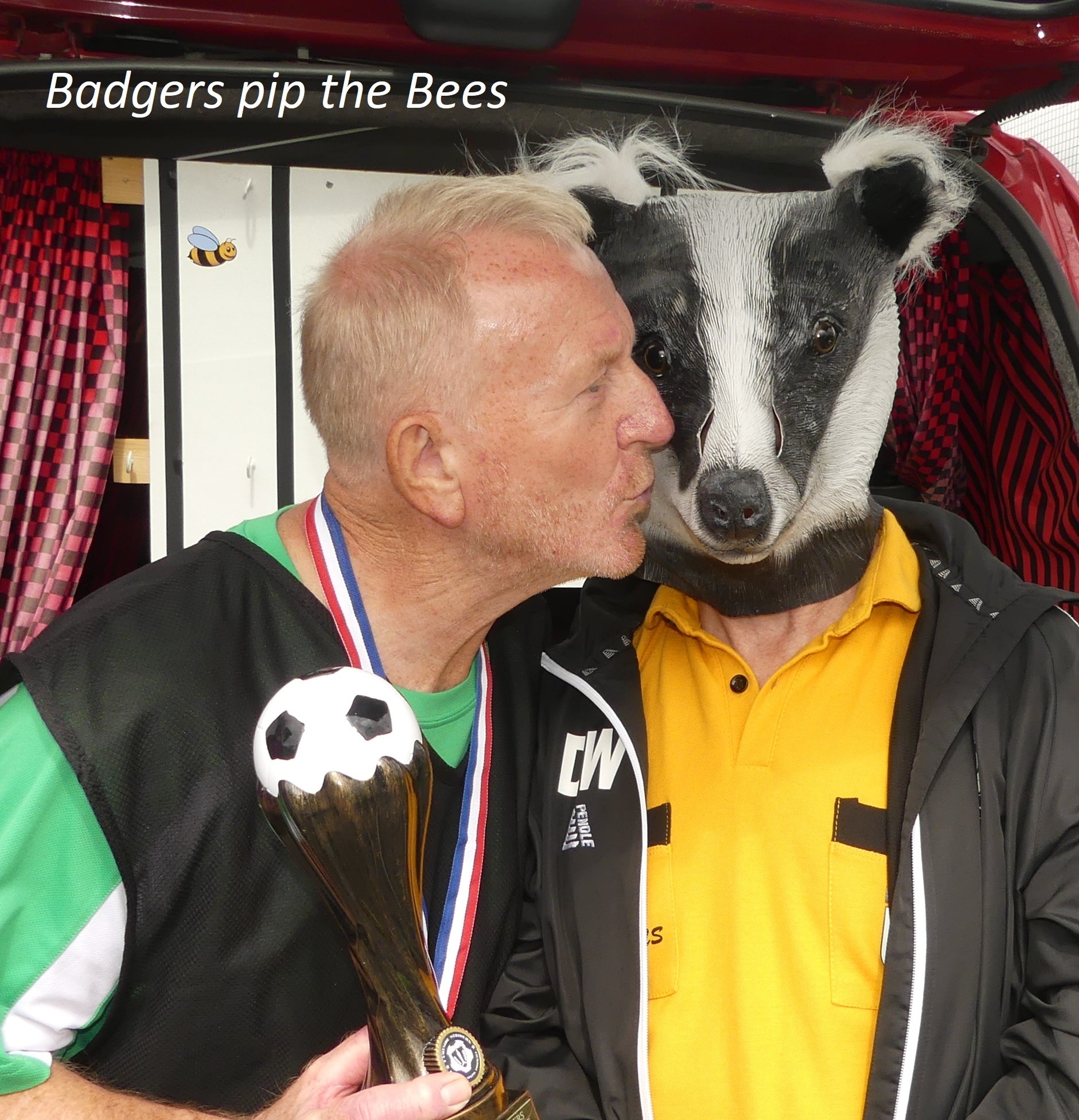 A suggestion by the Secretary to donate £10 of group funds to the local 'Badger Protection Group' was approved.  A token donation to assist a modest appeal for £130 to buy a transportation basket for wounded Badgers.  The creatures abound in the woods around here and are sometimes the subject of baiting with dogs handled by unfeeling and cruel people . Setts are under threat,  not to mention the nationwide Cull.  Our nickname and our badge mean something and we identify with our furry friends for whom life is not easy.

The Secretary is looking into storage for some of our lesser used kit and equipment. It's not cheap!   Which is a sign of how much money Alan's  garage has saved the group over the last few years. As circumstances around playing the game have changed we do not need so much kit at the moment, but for now we really wish to hang on to it.  The committee are all very supportive in seeing this facility come about. 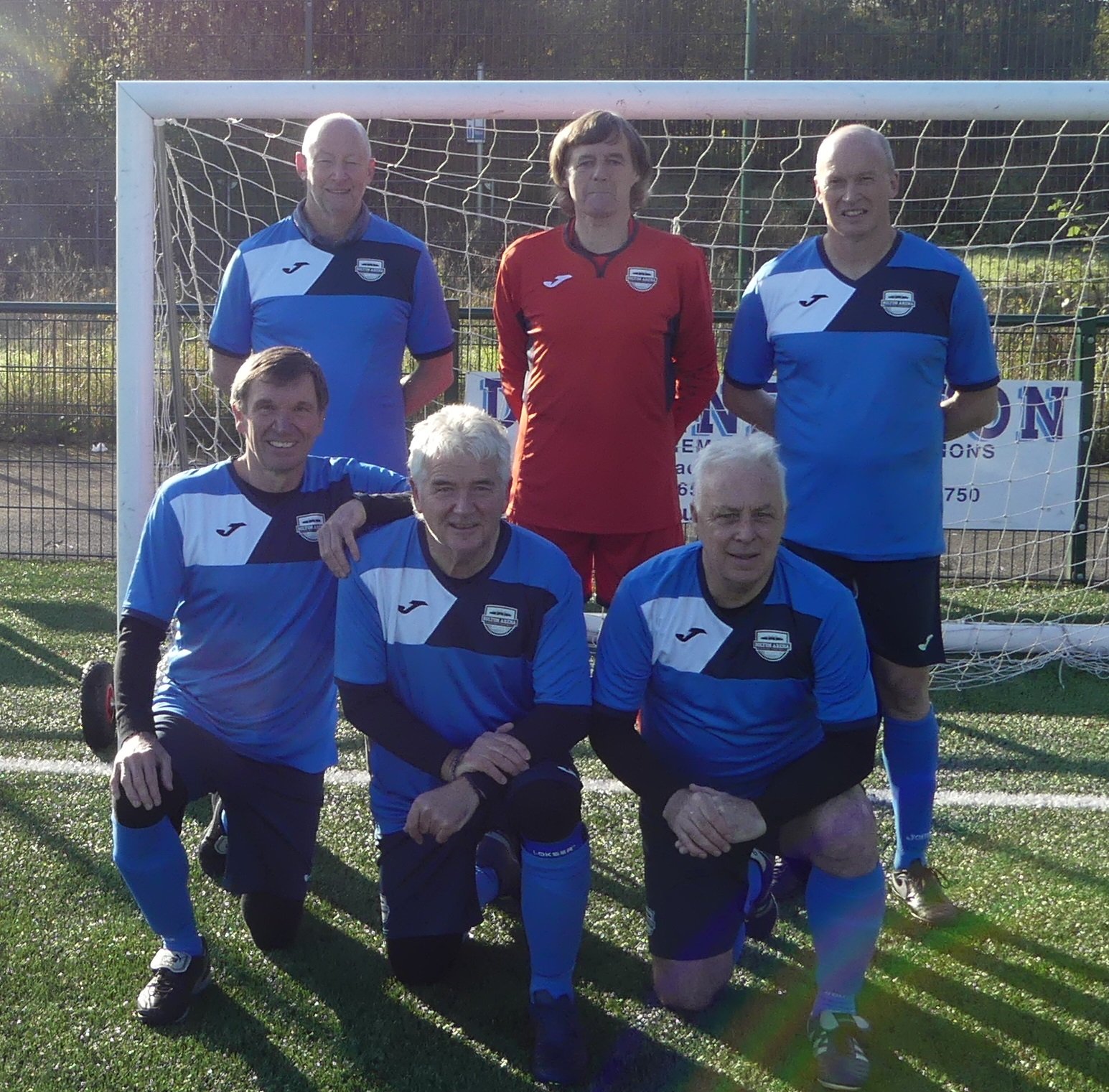 Bolton Arena have been invited to  attend Denton on 24th.September or 1st. October for a twenty minute each way friendly game of 'sweeper keeper'

This game will kick off after the Thursday session has finished. Garry Pearce will be invited to Referee and Colin Fielding is in charge of squad selection. Three committee member will make up the Striders team along with four  or five others selected from volunteers by Colin. You'll have plenty of notice. This game needs to be a fairly laid back affair.  It's arranged to present Bolton Arena with the 'Ken Richards Fair Play Cup' after the game has ended.  they will permanently keep this attractive trophy.

(UPDATE SEPTEMBER 11th. this game has been postponed)

New 'signing on' forms will be distributed from this week, to be returned across the month of September please with your subscription fiver. Thanks to Tony for print and preparation. 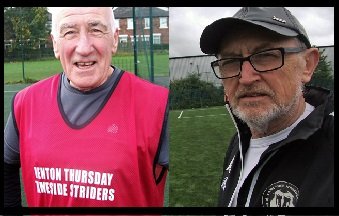 In fact the  Committee have decided to confer 'Honorary Member' status to Tony Cravagan and also  Alan Richards  for their commitment to group matters.  Tony especially has been doing a heck of a lot of Refereeing lately plus helping organise on Thursday's, and Alan spends several hours every week on group admin, web management, transport and storage.

The meeting ended with David Wilson expressing a desire to get back involved twice weekly, perhaps taking the warm-ups.

(Bolton Arena have already signalled the date is okay)