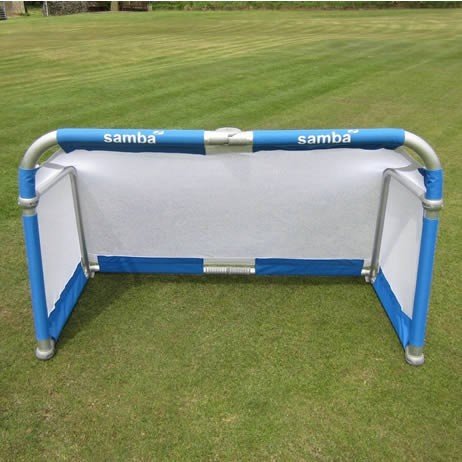 Read on for details of our technical and precision based game, where power can count for less.

PLAYED WITH A SIZE FOUR BALL 'SWEEPER / KEEPER is an alternative form of walking football.  Rules are devised in the main by Alan Richards and Tony Cravagan. The name of the game came from Colin Fielding.  Normal walking football  under Manchester County F.A. rules apply in terms of non-contact and not running.  Restarts of play (corner kicks the exception here)  , indirect free kicks (wait for the whistle) , height restrictions etc. Here at  Denton Three team runs equals a penalty etc.

The game reduces the power element replacing it with precision and more awareness of positional play. To remove the urge to shoot for goal with maximum power at every opportunity.  Goals may be scored from anywhere on the pitch but not from the defensive 'D' area. By using miniature goals  of good quality,  there is no need for a goalkeeper – often the most injury prone position on the pitch in  the conventional game.

Ideally the format is five versus five or four versus four. Three v three is possible but can be hard work. Pitch sizes should be reduced accordingly.  Higher numbers are possible,  and can be enjoyable  with extended pitches. Our maximum at King Street is eight versus eight. Flexibility is determined by the available space.

A slightly abridged copy of the updated rules below will soon be made available to every player.

RULES for THREE TOUCH 'SWEEPER/KEEPER'  September 2020:
Note:  The term "Goal kick"  covers up to  a three touch process from the Sweeper/Keeper  hereafter referred to as the 'SK'.

1. In front of the goals a 'D' is marked out with a 7 metre  radius taken from the centre of the goals. For the largest of pitches  sizes of 'D's' can be somewhat larger at the Referee's discretion.
2. Each team nominates their  'SK' and informs the referee of their nominated  'SK' which can change during the game but the Referee must be notified at every change. The 'SK' cannot use his hands to play the ball at any time.
3. A goal may be scored from anywhere within the area of play outside the 'D' area.
4. Any ball crossing the goal line is deemed a Dead Ball except when a goal is scored.  (See rule 5a for goal kick procedure.)
4a) When the ball goes behind the defensive goal line having last touched a player from the defending team ('SK' included) an 'advantage kick-in' will be awarded instead of a traditional corner kick.  This 'Advantage kick in' must be taken in line with the apex of the 'D' on the side of the goal the ball left the field of play. A goal may not be scored directly from an 'advantage kick in' nor deflected into the goal off a player of the opposing team. In this case a goal kick will restart play.
5. The 'SK' is the only player allowed to enter  the 'D' under the following conditions :
5a) To restart play with a  goal kick by clearly  'planting' the ball in the 'D' with his foot at ANY point in the area and taking up to 3 subsequent touches in the process , which means he can walk out with the ball or play  a pass from within the 'D' before exiting.
5b) The  'SK' must then leave the 'D' immediately the ball is in play.
5c) Should a ball strike the 'SK' when walking out of the  'D' play will continue even if this prevents a goal. However if the Referee decides this is a deliberate attempt to block or deflect the ball a penalty kick may be awarded. This deliberate action could also result in further action from the Referee.
d) The SK may kick the ball into the 'D' during play to relieve pressure upon himself.
e) The 'SK' can follow the ball into the 'D' if it is kicked into the area by his own player, or an opponent.
6. With the above exceptions any player defender or attacker entering the D seeking to gain an advantage  (other than momentum or accidentally as a result of contact)  will result in a penalty being awarded to the opposing team.
7.Penalty kicks  will normally be taken from a central position  7 metres from the apex of the 'D' whatever size the 'D' is.  In normal circumstances  a total distance of 14 metres.  All players , including the defending 'SK' must position themselves behind the ball  at least three metres away from the kicker.
7a). Penalty takers are not limited to just one step. There is no step count but they must walk up to the ball.  The ball must be allowed to run its course. When  the ball stops travelling it is considered  'dead' wherever it settles,  if a goal is not scored then  a goal kick is taken to restart play as per rule 5a).
7b).Prevention of a clear goal scoring opportunity: When this occurs  cynically by foul play such as deliberate handball by the SK or any other player, or by illegal contact on the attacking player,   a penalty may be awarded to the attacking team.  Reckless and excessively forceful challenges are already covered by the Manchester County F.A. rules.
8. A  goal scored from the three touch goal- kick process is not allowed and will not stand,  even  if it is deflected off an opponent .  Play will recommence with a goal kick from the other end.
9. Furthermore and to clarify :  a  goal cannot be scored directly from the three touch goal kick procedure or from a kick in, or an 'advantage kick in'.

10. Three running offences from  a team will result in the award of a penalty to the opposition.

________
Summing up Sweeper /Keeper….
A more technical game than regular walking football especially suited to older players and younger ones seeking to improve their passing skills. Players must seek to find a channel to goal which they can take advantage of. Inter passing movement can open up these channels leaving the mini goals vulnerable to an attempted strike. Players can shoot, but the level of accuracy required from distance usually favours a stroked ball . A medium to long range 'passing shot'.
There is no restriction on where the ball is struck from and if a channel is seen from much further back then a more powerful ‘shot’ will be needed and these can succeed with some spectacular results.

The intention of the game is to improve passing precision and movement. There seems to be much fewer cases of running and contact has been low. Scoreline’s are often close. Some players master the 'SK' role very quickly and perform it well. Making chances hard to come by and posing a creative challenge for attackers.
This game is every bit as demanding on the players and offers  levels of exercise that compare well  with the normal game. 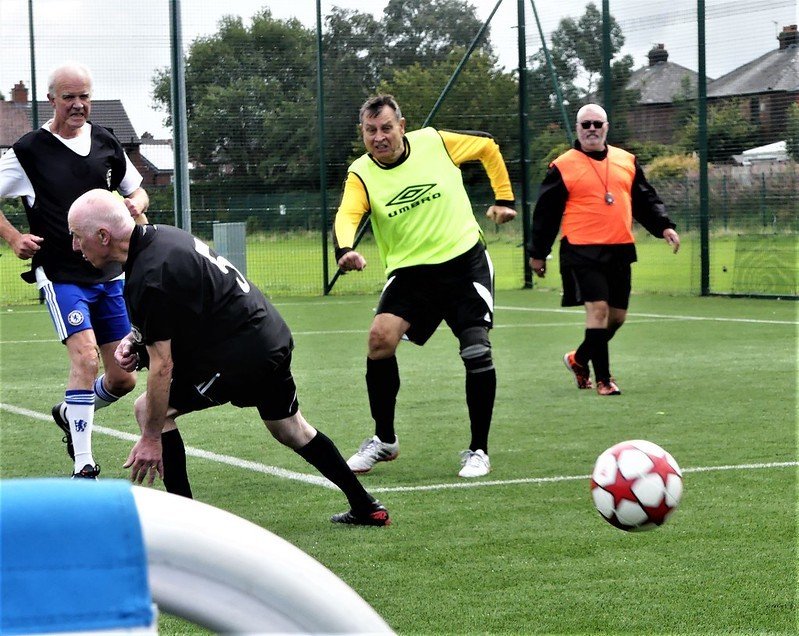 Picture above comes from our 'Summer 19' festival played to this format which was a rip-roaring success.

You can add a three touch element if desired which makes the game even more inclusive.  At the moment we are playing three touch post lockdown.

The satisfaction of striking a shot very firmly and seeing rocket into the net is equalled by the precision placement of a stroked ball from distance finding the target.

Note: Mini goals vary in price. We are lucky and have two sets of the expensive folding ‘SAMBA’ type thanks to various grants we have been awarded over our time as a group. Taking advantage of them in this way was always envisaged. It’s appreciated that regular Goalkeepers will not much like this format BUT the custodian role is specialist and there are few people willing to do it on a regular basis, much fewer who are very good at it. Our group has several ‘keepers who are, but it is hoped they will join in the fun of ‘sweeper/keeper’ when they get the chance to do so.