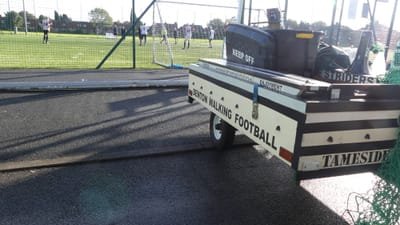 A MEMBERSHIP VOTE ON THE ADOPTION OF THIS CONSTITUTION HAS BEEN COMPLETED AND UNANIMOUS ACCEPTANCE OF 67 POSITIVE VOTES RECORDED.

(The Code of Conduct included below is already established)

Introduction
The name of the group is Tameside Striders Denton Walking Football Group. Established in 2016.
The purpose and aim of the group is to facilitate the playing of Walking Football and promote its attendant recognised benefits. In addition to internal recreational games we may sometimes take part in external leagues, tournaments and friendly games at home and away when circumstances permit.
- - - - -
Officers & Management
The Group will be Governed by a Committee consisting of the following officers.
Chairman, Secretary, A Treasurer or 2 x Co- Treasurers, plus four other committee members.
More than one position may be held by an individual, excepting that of Chairman.
The members of the Committee will be elected annually at the AGM by the Group Members. A proposer and a seconder is required in writing for potential replacement committee members.
Each member of the group including committee members will have one vote each for each position being elected.
In the event of any vote being deadlocked, then the Chairman will have a casting vote.
The Executive Committee shall have authority to deal with any matter not expressly covered by the Group Constitution & Rules.
Continuing Membership
Group membership is renewable annually in the Autumn of each year from a date notified one calendar month in advance.
The Group reserves the right to refuse or withdraw membership to any applicant or current member it feels may be detrimental to the Group's activities. (Our Code of Conduct is at the foot of this Constitution).
Meetings
In normal circumstances the A.G.M. will be held in August and an additional players meeting in February of each year.
Members must attend these meetings in order to cast any vote.
An additional players meeting can be requested by any member submitting a request to the Chairman in writing, along with valid reasons for such a request.
Notice of any proposed changes to the Group Constitution & Rules must be given in writing to the General Secretary by the 31st July in any given year, such notice to include the text of any proposed change.
Notice of all business to be transacted at the A.G.M. will be given to all members in the form of an agenda at least 7 days prior to the AGM.
At each annual A.G.M. the Treasurer or a Co-Treasurer will give a report on the financial state of the group, and a summary of all financial activity since the last meeting. In addition the Treasurer or a Co-Treasurer will report weekly and/or monthly to the other members of the Committee giving a rundown of income and expenditure in the interests of regular transparency. Photocopies of monthly Bank statements will be included whenever possible.
Records

The following records shall be maintained by the Group: -
Minutes of Group meetings. Reports from official Executive Committee meetings.
Income from sessions ie. players game fees. It is incumbent on the Treasurer or a Co-Treasurer to make these details known to the committee on a weekly basis in normal circumstances.
Weekly and Monthly expenditure in connection with sessions - pitch rental & Referees etc.
Other Expenditure and income.
Addresses of players including email if applicable and phone numbers. Also next of kin details to be contacted in any emergency
A record of disciplinary proceedings and hearings.

New Membership
Any new member wishing to join the Group should ideally attend a session as a spectator first. If male he must be older than sixty years of age. Females over thirty five years are eligible to join. Joining after April 1st. will not attract a membership fee until the Autumn to cover the following season. Registration forms must be fully completed before taking to the pitch.
Applications for admission to the Group will be considered by the Committee prior to majority acceptance. As stated previously in the constitution we reserve the right to reject applications on any reasonable grounds.
In special circumstances it may be possible for a 'guest' player to join in our session on a 'one off' basis.

General
Members complete a registration form which will be updated from time to time. This form clearly states all taking part in group sessions do so at their own risk.
The home pitch/ground shall normally be the Denton Youth F.C. facility at King Street Denton.
The Group will endeavour to provide modest accidental injury insurance. We aim to have our defibrillator present at most sessions and there is an additional one inside the building at our home ground
Our website hosting costs are paid from general funds. The site is edited by the Secretary at the moment but the content is not limited to his editorial input.
The playing rules we adopt are currently Greater Manchester County F.A. rules for walking football as decided and drawn up in consultation with our local F.A. in January 2018. Rules we helped design, although we reserve the right to amend them should the Committee see fit.
We are not bound to accept rules emanating from the Walking Football Association or the National F.A.
When we play groups (teams) from other Clubs we will agree rules beforehand and proceed as arranged. Referee's decisions are to be accepted by players but any clarification can be sought after games.
Playing arrangements will vary from week to week, session to session. We will always endeavour to provide a pleasant playing environment where results matter but are not seen as important. When necessary the committee reserves the right to restrict attendance to one session per week.
Attendant players names at all sessions will be recorded on paper, either in an attendance book or by themselves signing a register at the same time as paying their session fees on arrival.
Players will be asked to conform with any instructions given by a committee member on a session by session basis. Close adherence to our Code of Conduct' is mandatory and required from everyone who attends King Street 'walking football ' sessions.
Cameras and video play a large part in our activities and all players sign an acceptance clause in the registration document. All need to be comfortable for their image to appear online, and elsewhere. Permission for this is clearly given by signing the registration form.

Disciplinary Procedures
When required The Group Committee will convene a Disciplinary Sub- Committee comprised of no less than three committee members to deal with breaches of our code of conduct (see foot of constitution) . A Chairman , who will also act as the Secretary of this committee will be appointed on an ad hoc basis by mutual agreement. Other group members may, at the discretion of the Chairman be authorised to sit on any such committee, should a conflict of interest arise.
Matters relating to the conduct of players, supporters and/or team officials can only be dealt with by this Disciplinary Sub-Committee. Such matters will normally be reported directly to the Executive Committee by the match referee or any player who feels it appropriate. Players may be asked to appear before the Sub-Committee. The outcome will be notified to the appropriate party as soon as possible. There will be no right of appeal.
No person may sit on a Disciplinary Sub- Committee if they they have a direct interest in the case being discussed. Any doubt on this will be determined by the Group Chairman.
Parties will be given written notice of the date and time of the meeting and any letters of defence or mitigation should be sent to the Disciplinary Sub-Committee Chairman at least 48 hours prior to the hearing.
If any relevant party fails to attend then the matter may be decided in their absence.
The outcome of Disciplinary Hearings will be notified to relevant parties in writing by the Disciplinary Committee Secretary within 7 days of the relevant Disciplinary Hearing.

Appointment of Referees etc.
We have a pool of Referee's and they volunteer to officiate our games on a regular, or irregular basis. Most are F.A. and/or W.F.A. qualified and are expected to keep up with the rules we abide by, and any changes we may introduce. Some are not qualified but carry as much weight as anyone else who offers to Referee a game. The Executive Committee will always support our Referees. We will always try to arrange for a Referee for internal games but this may not always be possible.


This group was established to provide walking football within sensible parameters of competitiveness Results matter but are not important. Exercise and enjoyment is our number one aim for all who attend. We are an inclusive mixed ability group.
All playing members should familiarise themselves with this code of conduct.
- - - -
Any person participating in our sessions at Denton or away from home playing in leagues, tournaments or friendly games agrees to abide by this Code of Conduct.
Players at all times should play the game as it is intended to played. A good natured later life bonus for older players. Accept the rules by which we play by. This is not football it is a derivative of the game. Walking football is a risk reduced version of the game we remember playing in days gone by.
D.W.F.G. Committee members and your playing partners should be treated with respect at all times. Equipment provided must also be viewed in the same light.
- - - - -
Recognise that the Referee's decisions are final. No running (includes jogging) on or off the ball. Referee's and any Assistant Referee's must be treated with the utmost respect. As should Denton Youth F.C personnel and their premises.
- - - -
Accept the ethos of non-contact walking football as defined under the rules by which we play either conventional walking football (Manchester County F.A. Rules for Walking Football) or our own sweeper/keeper variant - see adapted rules print out.
- - - -
GROUP WARM UPS ARE NOT COMPULSORY: However if you wish to perform your own routine please stay out of the group line up and occupy a quiet corner of the pitch.
Never engage in unsporting behaviour, use foul language , gamesmanship, bullying, violence or aggressive behaviour all of which will be liable to have negative consequences on your membership of our group.
PROMOTE AND ENDORSE A SENSE OF PERSPECTIVE TOWARDS RESULTS AND PERFORMANCES OF YOUR OWN AND OF OTHERS. FAIR PLAY and a FRIENDLY SPIRIT IS PARAMOUNT ! THANK YOU.
_______________________________________________________________________________________________________